To overcome above problems, Spring framework developers has come up with Spring JDBCTemplate, which handles all overhead like connection and statement management and also exception handling. Thus, providing developers to write their query and focus on business logic. Here in this tutorial we will demonstrate example of CRUD operation using spring JDBCTemplate.

Technologies used in this examples are :

This example has been implemented using Eclipse and maven plugin are used to create the basic folder structure for maven java project. Few other files have been included to implement this example. The final folder structure looks like the image below. 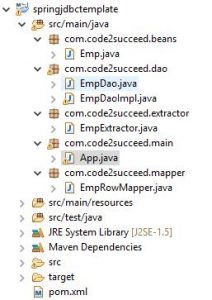 Add Spring JDBC and mysql dependencies into the pom.xml file.

We are using mysql database, using which Emp table will be created with below database script.

A model to store Emp data is required, so we’ll create Emp model class as below.

Mapper class : It performs the actual work of mapping each row to a result object. Developers need not worry about exception handling, SQLException will be caught and handled by the calling JDBCTemplate.

Extractor class : It contains logic to create object(beans) from resultset.

For DAO pattern, first we need to create one interface for CRUD application as below.

Now implement above interface and create EmpDaoJDBCTemplateImpl class which will contain JDBC code for CRUD operation.

We have created App.java class which contains simple logic to test the CRUD application.