As per the concept str1 is definitely immutable. But then why the output of the program is like that ?
In the program, JVM creates two objects, str1 and str2 separately. When str1 + str2 is done, JVM creates a new object and store the string “Code2Succeed” in that object. But it doesn’t modify the content of the string str1. After creating the new object, the reference str1 is referred towards new object. The point we should observer that the content of the String str1 are not modified. The old object that contains “Code2” has lost his reference and new object “Code2Succeed” is referred by str1. So “Code2” is unreferenced object and garbage collector will remove it from memory. 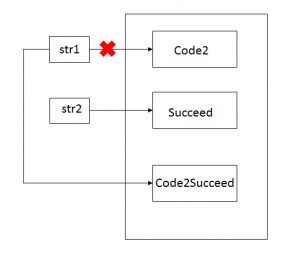